Since 2003 we’ve moved house six times. Six downsizings, with sheet music a casualty. Once I got over the initial shock of ditching music that I thought in my pride I’d learn one day, I got into the swing of things and worked on the principle that if I hadn’t learnt it over the last twenty years when my eyesight and hearing were good, I wasn’t going to master it now. That rule has served me well in other contexts too. Don’t worry, musicians, I gave it all to good homes.

A particular casualty was Messiaen and ‘forearm smash’ stuff. The surprise is that I kept it so long, for years ago after learning Dieu parmi nous I worked out that mastering one Messiaen piece took about the same time as learning at least ten by anyone else, so it was a bit of a no-brainer really.

One benefit of the great chucking out has been the discovery of gems I forgot I had. Wadely gems, in particular: ‘Three Short and Easy Postludes’. Short they may be, but easy? Well, not particularly so. I learnt them, then I looked online for more, and found three more short and easy postludes – or maybe preludes (so that’s six now). These are easier, almost sightreadable—kind of FRCO test standard, maybe a bit more demanding.

Of course, the reason I take to them is the Carlisle connexion. Wadely was organist at Carlisle cathedral for fifty years, retiring in 1960. I never knew him, for I didn’t start lessons there until 1963 with his successor. By that time, the organ had been modified, but the basic sounds were as he knew them: Willis choruses underpinned by a 32 foot metal open, early (1907) Arthur Harrison soft stuff and a huge Tuba (organ anoraks will know what I’m talking about). When I’m playing the Wadely pieces I feel a certain affinity with them through having reasonably clear ideas of what sounds he expected. His pieces are similar to, but I think better than, Stanford’s preludes and postludes which, apart from the last one in D minor, are overrated. 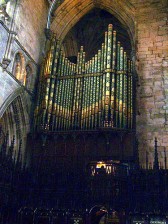 The music is beautifully written. Like Bairstow, eight years his senior, he preferred flat keys to sharp keys. Like Bairstow, there is that use of progressions, discords and suspensions that gives a gentle, plaintive, yearning feel, redolent of the Edwardian era. Like Bairstow, he calls upon the full resources of a large organ for choral accompaniment. Wadely’s tunes have gone right into my brain, with dratted earworms that I can’t get rid of.

They are pieces of real quality. His successor’s successor, Jeremy Suter, recorded a CD of his choral music sung by the cathedral choir. It’s good stuff. There are lovely miniatures and a couple of very fine extended anthems: There shall be signs in the sun and There shall come forth a rod. All this, and the Communion Service in F minor, are every bit as good as Stanford or Charles Wood. The Carlisle chant book, as you’d expect, has lots of Wadely, only a few of which have found their way into published collections. Given that he was a pupil of Stanford at the Royal College of Music, am I too fanciful to hear a bit of Brahms now and then?

I wonder what might have come of Wadely if he’d moved somewhere less remote than the Border city. He was active in the wider musical scene of the area and his output includes many works for schools and secular choirs, so maybe having carved out that niche for himself he was content. He lived on Brampton Road, one of the posher parts of the city, and became a musical doyen of a substantial part of northern England. In his heyday his nearest colleagues would have been Armes, Dykes Bower then Conrad Eden at Durham, Bairstow then Jackson at York, Cook at Leeds and I suppose Goss Custard at Liverpool. Different days altogether.

Apart from the Suter CD there are no recordings as far I know, so I’m inclined to make one on the St Modwen’s organ here in Burton, perhaps also with works by some of his contemporaries (Bridge, Dyson for example).

Not the console FWW knew, but many of the sounds the same

I saw the great man once at a performance of Messiaen’s La Nativité du Seigneur by Philip Dore in St Cuthbert’s, Carlisle. I was in my early teens and he was in his eighties, a small stooped figure who by invitation gave a vote of thanks. He added that Messiaen’s music was not to his taste. Can’t say I’m surprised—it’s less and less to mine.

Even in my youth, after his retirement, Wadely’s name was spoken in hushed tones in Carlisle. To this day the Carlisle Music Festival’s F W Wadely Trophy proudly adorns victors’ shelves. Those were the days when cathedral organists were aristocracy, even in Carlisle. So to finish with, here’s a jewel overheard during a conversation between two Carlisle musicians (imagine the flat vowels, properly enunciated consonants, and tinges of Scots and Geordie that make up the Carlisle accent):

First musician, in reflective mood: “You know, Stravinsky was born the same year as Dr Wadely” (he was always Dr Wadely).

Second musician, similarly reflective: “Aye, is that a fact?”

“Whatever happened to Stravinsky?”