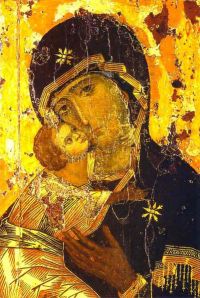 Firstly, it’s the Feast of the Nativity of the Mother of God. Contrary to what many RCs think, Mary is held in high regard in the Anglican churches. In the C of I calendar there are three festivals for Mary: the visit by Gabriel, Mary’s visit to Elizabeth, and her Nativity. No other saint has three festivals. Whether or not we intercede through her is a matter of personal decision: some do, some don’t. You can read the Mary homily here.

Second, this Sunday falls in the middle of Mental Health week. I’ve blogged about this before and will not do so again, yet. But it too is worth a homily, so if you’re interested, try here.

And third, the lectionary readings set for today, Proper 18 Year C, are certainly worth a homily, and a long one too. Jesus is trying to sell his way of life to others. He’s not like any salesman that would be given a job nowadays. He’s an anti-salesman. He doesn’t ‘embiggen’ his product; he’s brutal about what it will mean. ‘Don’t buy into this unless you’re prepared to take the flak. It’s going to be hard’. You can read this homily here – and I thank Mark Driscoll of Mars Hill Church, Seattle, for his inspiration. He’s unlikely to read it, but if he does he will see that I’ve plagiarized him mercilessly.

The gist is that we give up too easily. Disciples need discipline. At school this morning, we touched on how discipline enables achievement and goals. The little and not-so-little darlings appreciate this with their hobbies and sport. Our children went to a primary school in Nottingham where pupils were, as the Headmaster proudly wrote, so busy exploring different cultures that there just wasn’t time for the 3Rs. I still have the letter in which he said so. Soon after that he became an Inspector.

As I’ve said before, I taught Anatomy to medical students for 30 years. It’s one of those subjects where it’s possible to be wrong. To give an obvious example, the thing at the end of the lower limb is a foot not a hand, and its nerves are the tibial and common fibular, not the median and ulnar. Here’s another: the pulse you feel in the neck is the carotid, not the femoral. On one occasion, when I was dealing with a student in his early 30s at the new medical school in Derby, I was asking questions as part of a teaching session. I asked him one question, he replied, and I said ‘no, that’s incorrect.’ He was stunned. He said to me ‘you’re the first person ever to have told me I’m wrong.’ I was stunned.

There is absolutely nothing in Holy Scripture that encourages the malign view that putting up with second best, or error, is to be encouraged. Certainly not the gospel for Proper 18 Year C. Love is not to be found in toleration. Quality is not incompatible with compassion.

2 thoughts on “One Sunday, three sermons”