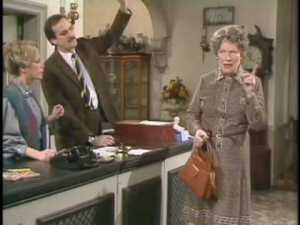 I’ve been fiddling with fonts and colours.

I was ‘short sighted’ by the time I was 8 and I’ve had specs ever since. About 10 years ago I found I needed them less and less for distance vision, and could often do without them altogether. Now they’re most likely perched on my forehead, and I forget about them. I go looking round the house for them for ages before realizing where they are. Like Mrs Richards in Fawlty Towers.

In 2008 some of my left retina became detached. It was operated on fairly pronto, but despite that most of it died within 6 months, leaving me with only a central field of view. This might have been OK but for a subsequent cataract on the same side. It too was operated on, but with no perceptible improvement.

So it’s right eye only. Fortunately, I was told there was no risk of retinal detachment there. As eyes go, though, it’s not what it used to be. Now, I need a magnifying glass, especially in the evening. I’m thankful for computer screen and Kindle where text can be ’embiggened’.

I’m conscious of the legibility (is that the right word?) of websites. I need contrast. I prefer dark type on light background than light type on dark background. I find sans serif fonts like this easier to read than serif fonts, though I think the serif fonts more elegant. Nobody with even the slightest smidgeon of good taste would tolerate jokey fonts, and I don’t find it easy to read italics. Size matters, of course. If it’s too small, I don’t bother with the website; if it’s too big, it’s like being in the infant class, and if it’s CAPITALS it’s like being shouted at. It’s no easy matter to get things right.

What about colour? Bright white is, well, too bright. I’ve gone here for a sort-of Cambridge blue—not for any reason of loyalty, but because SWMBO said it looked well and went with Wider than the heavens (see the bar at the top).

Something’s going on with the hearing too. Is it me, or do people talk too quickly and without proper enunciation? Mangled vowels, inaudible consonants. I’m not talking accents here – I like the Birmingham accent, the Dublin accent etc – but about articulation. People could start by opening their mouths a bit more. Speech discrimination, I suppose, is what the audiologists might call my problem. Or maybe I’ve got a brain tumour. Or maybe I’m just a grumpy sod.

If you have any constructive criticism about fonts and colours on this blog, I’d be glad to have it. Comments about my grumpiness you can keep to yourselves.