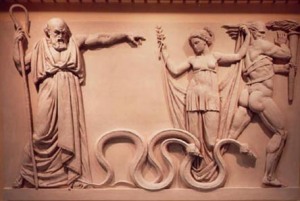 Passion. Jesus passively bears what must be borne, in order that new life will blossom. The passion story illustrates that refreshment and renewal come only after we’ve gone through the painful process of killing the past, or letting it be killed. Renewal comes when we let go of things we once held dear, of attitudes and attachments that once sustained us but now hold us back and tether us to the ground. Jesus said: in three days I will destroy this temple, and then I will build a new one. This applies to our church life as much as it does to us as individuals.

What might constitute the ‘old’ that needs to be relinquished in order that new life may flourish? What puts people off the church as an institution? There are lots of young people in the vicinity, but few come on Sundays. Why not? If they did, would they be welcomed and treated as equals, or would they be whispered about, left to flounder, and glared at they sat in ‘our’ pew? Would we be delighted to see them, or would we feel threatened as they invade territory that we consider our own?

Something needs to happen if the church is not to wither and die. If you saw the Pope’s election (you were probably glued to it), you might have witnessed a TV commentator, ignorant of the Lord’s Prayer, having to depend on the translator. At weddings and funerals in England, few people under the age of 50 know the Lord’s Prayer, and hardly any under the age of 40. That is coming here. There is now so much hostility to the church from the young people of Ireland that the outlook is bleak. The new Archbishop of Canterbury has given the church a decade before implosion. Why don’t the bishops of the Church of Ireland ever speak plainly? God forbid they offend their friends and relations.

The church is entering its own Passiontide. It must go through painful times before it can be reborn. And when it is reborn, maybe it will look nothing like what it replaced. In the gospel, expensive oil is used on Jesus’ feet. To wash someone’s feet in those days and in that culture was (and is) something that only the lowest of the low would do—it is beneath one’s dignity for any respectable person to wash someone’s feet. We need to lose our dignity and get our hands dirty. As the psalm has it, those that sow in tears shall reap with joy. This is the only way that renewal will come.

Patrick. Legend has it that Patrick banished snakes from Ireland. This is absolute tosh, of course, like so much about Patrick. Nevertheless, there are plenty snakes to be banished. The snake that tempts us to lying, to pride, to thinking that we know best—just as it tempted Adam and Eve. The snakes in church that cause people to find fault and go off in a huff rather than putting differences aside and working together. The snakes of sloppiness in church: lateness, ill-prepared readings, carelessness in presentation. The snakes in society: consumerism, advertising, celebrity. The snakes in self: hardheartedness, lack of humility, lust for power  and possessions. We are part of a society in which a garda who threatens to prosecute a pub owner for after-hours drinking is told ‘either join us or be transferred’? And people think it’s amusing. We are part of a society in which the rich and famous are lauded for slithering out of being prosecuted. We are part of society in which justice seems to be reserved only for the wealthy and well connected. Why do we tolerate this evil? People seem to admire those who lie and cheat. As faith has decreased, greed has increased.

Pope. The Pope has said that unless the church concentrates on its message, it will become simply a compassionate NGO. God knows his church needs renewal. It’s a huge organization, and its problems are huge. But let’s not be complacent: their problems are our problems, only our organizaton is smaller, so our problems are smaller. They all stem from the same human ‘snakes’: avarice, envy and seeking the approval of the wrong people. The Pope is right: we must turn away from these ‘snakes’ and turn towards the message and example of Jesus Christ: love, compassion and selflessness.

Persevere. The message of Jesus is that letting go of the past leads to hope. Letting go of the past is a matter of forgiveness. We forgive others, we ask for their forgiveness, and we forgive ourselves – self-forgiveness. It’s such a waste of energy to carry around grudges and resentments. When we lay down these burdens, the stone that entombs us in the past rolls away, and we go on our way lighter. We have more energy to engage our imaginations. We become more attractive: radiators rather than drains. When we put the past to death on the cross, we ascend to the heavens. The balloon takes off. This is salvation, resurrection.

Here are some suggestions for this coming fortnight as we reflect on church life and personal life.