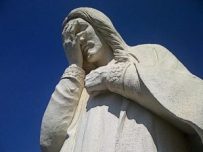 The abuse scandals in the Church of England haven’t featured in this blog up to now. This is not because I don’t care, but rather because I care so much. I’m so incandescent with rage that I hardly know what to write.

Anybody who wants a flavour of what’s been going on could start by dipping into two websites: Thinking Anglicans and Archbishop Cranmer. If you can’t be bothered, then take it from me that the institutional Church of England is secretive, evasive, cruel and corrupt. The people who work at the coal face, paid and unpaid, are by and large utterly decent and thoroughly commendable, but they don’t know the half of what goes on in the sleazy corridors of power.

It’s difficult to preach about this because, to be frank, the bulk of the punters simply don’t want to know. They come for a weekly fix of what they’ve always done on Sunday before pootling off to the pub or the local beauty spot. The last thing they want is for their complacency to be sullied by deeply unpalatable facts about the organisation that they profess to be part of. The latest morsel to come our way is the extent to which the tentacles of the establishment infiltrate this fetid, decaying corruption. Read this: Nobody’s Friends

Of all the issues that the Church should be concerned with, this—abuse in all its forms—is the topic that eats away at me the most. I’ve no idea why this should be so, for I don’t recall ever having been on the receiving end, except as I relate below.

At school I was taunted for being fat, bookish, wearing specs, and being more interested in church music than in grabbing other boys’ scrotums in the scrum. But I didn’t regard this as abuse then, and don’t now. I wasn’t at boarding school so had no experience of what is alleged to have gone on in some of them. As a church musician I soon became aware of the need to maintain distance between young choristers and me, and on the two occasions when I felt I’d overstepped the mark I visited the parents to apologize.

So, as I say, I’m not sure why the revelations of abuse should so affect me other than being profoundly disappointed in an organization that professes to be Godly. Every fibre of my being goes out to those who have suffered.

I am ashamed to be a public representative of the Church of England. I was ordained at the age of 56 (now 69) and I wonder if I’ve wasted the last thirteen years of my life—a fool to have been seduced by the institution. Am I alone amongst clergy in feeling this? And there has been not a single word of encouragement from any bishop.

In other walks of life, the boss might sympathize with the plight of embattled foot-soldiers, assuring them (us) of support when needed. I can imagine a Brigadier encouraging the troops after a battle that didn’t go to plan, in order to restore morale.

But not a peep from Church of England hierarchs.

I must confess to a feeling of schadenfreude about the John Smyth and Jonathan Fletcher stories. At several points in my life I’ve been assailed by evangelical so-called Christians who have condemned my views, and assured me that I’m destined for hellfire unless I believe precisely what they believe. This happened in childhood (rural Methodism), at university where some of the most oleaginous and judgmental creeps imaginable (Cambridge Christian Union types) poured scorn on us “College Chapel” Christians, and since then at meetings of Churches Together, especially in Chesterfield and Burton.

All this could be regarded as abusive, so there’s a certain guilty pleasure in seeing that the scions of these corruptions of Christianity now stand with their reputations in tatters. To read that one of them beat the crap out of an adolescent boy, to the extent that blood was gushing down his legs, puts that form of “Christianity” in its proper place. Just imagine: eight hundred lashes—they had to break for lunch—as punishment for a wank, or some such. Ye Gods. Satanists would be more humane.

About five years ago my elder son told me that if I willed any of my estate to the church he would utter incantations and stick pins into a clay doll made in my image. There is no danger of that. After a lifetime of sacrificial giving to the church, not one penny more will go to this cruel, hypocritical and putrid institution.