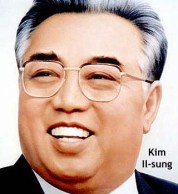 North Korea has long fascinated me.

Michael Palin’s Channel 5 programmes (http://www.channel5.com/show/michael-palin-in-north-korea/) helped me to see how, in a country completely flattened by US forces just over half a century ago, people see Kim Il-sung as saviour.  The social morality of Confucianism helps me to understand how loyalty and filial piety contribute to the Kim family surviving in power. With US forces perceived as hostile only 100 miles away from Pyongyang, I understand the necessity to run a tight ship. Given the changes that are beginning to occur, I wonder how long it will be before Pyongyang is much like any other city in east Asia.

North Korea has affected my theology too.

Consider some of the stories surrounding the births of the Kim leaders. Heavenly sounds; miraculous changes in flora and fauna; rainbows; stars. Sound familiar?

Why are they written? Quite simply, to embiggen* the subject.

Biblical scholars have known for centuries that the scriptural birth narratives are fiction, fairy tales written for exactly this purpose. There is nothing even remotely new about this proposition. The stories in Matthew and Luke are stuffed with allusions to Hebrew prophecies and how the babe of Bethlehem is their fulfilment—again to ‘big up’ the child in the manger.

For me, the value of Scripture is in allegory and poetry. Some of it is terrible tripe. I recall my ageing Methodist minister uncle telling me that increasingly he was a Wordsworthian who saw God in all things. Just as platelets are broken off bits of megakaryocytes, so everything in the cosmos is a bit of God. We all have particles in us from the big bang. We may well have within us, in the form of mitochondria, some of the earliest life forms. We are all bits of God. What is not God is nothing (I think that’s from Sergei Bulgakov). What is not God is no thing.

I can cling to that, just about, and to the last line of one of the verses of This is the truth sent from above: ‘and if you want to know the way, be pleased to hear what he did say’ [and do].

* embiggen came into use, along with cromulent, after being used in ‘Lisa the Iconoclast’, the sixteenth episode of The Simpsons, seventh series (1995-6).

7 thoughts on “The Kim code”