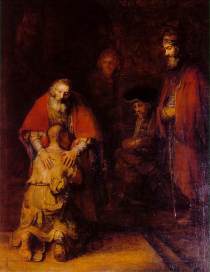 I suspect all church people have heard ‘I’m not coming to church: you’re all a bunch of hypocrites.’ The usual response is ‘well, there’s always room for one more, so you’d be in good company.’

We hear a lot about Judas in Holy Week, and Judas is, amongst other things, accused of being a hypocrite. Judas wasn’t a particularly bad man, just weak. His weakness is part of the story, just as are Peter’s denials. Maybe if Judas hadn’t killed himself he’d be a saint like Peter—maybe he should be, since he was the agent of Jesus’ liberation from earthly form. Yesterday we heard him say that money used to buy oil should be given to the poor, whereas in fact he wanted to filch it for himself. And tomorrow there’s an element of ‘it wasn’t me, guv, honest’ in the Judas story.

It all puts me in mind of Homer Simpson’s advice to Bart. Homer says: I want to share something with you: the three little sentences that will get you through life. Number 1: Cover for me. Number 2: Oh, good idea, Boss! Number 3: It was like that when I got here.

As it happens I think Homer’s a great guy. For all his faults, he’s a kind of innocent, and he certainly loves his family. But enough of these insights into my depraved televiewing habits. I want to talk tonight about demons—the kind of demons that assailed Judas, and because there’s Judas in us all, in our human nature. Once again, biology plays its part.

We left Jesus on Sunday standing at the gates of the city, facing death in the city of wrong. Jesus faces his demons. As we go with him, we must face our demons, our fears. These demons are the enemies within, enemies of spiritual growth, enemies of resurrection, enemies of imagination. Jesus tells us to love our enemies, but we can’t love these demons until we see them, and we can’t see them until we look them full in the face.

What are our demons? Let’s look at the demons in the Passion narratives. Three are obvious:

So three headings, but in truth they can be compressed into one: the sin of Adam—trying to be what we are not. The fig leaf has nothing to do with covering up our genitals, but is about covering up our naked selves by putting on a mask, a persona to hide our true faces. We deny the truth because of our need to save face, but it’s not the face that suffers. It is the inner self that I harm when I deny what is evident to others. This inner self that is, in my theology, the Christ within, the Divine within. When we harm others, we wound the Christ within as surely as any nail on the cross.

I want to give you some biological basis for the Christ within. I begin with a prayer from the Liturgy of S Basil, addressed to Our Lady.

Because of you, O full of grace, all creation rejoices, the ranks of angels and the human race; hallowed temple and spiritual paradise, pride of virgins; From you God was incarnate and he, who is our God before the ages, became a little child. For he made your womb a throne and caused it to become wider than the heavens.

Mary is the means by which logos, word, wisdom becomes human. She is God-bearer, QeotokoV. Now, just listen to this reproductive biology.

All this is biology. Now put this in theological terms. During pregnancy,

But Mary is the representative of humanity, she’s one of us. So by spiritual extension, the Christ-event that began with Mary’s pregnancy and transforms her, also transforms you and me.

Jesus’ divine cells invade Mary. Jesus invades us – the divine spark within, like a divine radioactive core, ready to saturate all our cells, all our being, if only we will let it. As embryonic cells devour maternal tissue to enable exchange, so the divine core within can, if we allow it, devour our less salubrious parts, to enable exchange with God. Bishop Lancelot Andrewes in 1614 wrote: ‘He was not idle all the time He was an embryo — all the nine months He was in the womb; but then and there He even eat out the core of corruption that cleft to our nature and us …. [We] were by this means made beloved in Him … this the good by Christ an embryo.’ This is astonishing for 1614, without knowledge of reproductive biology.

Exchange. The embryonic Christ and Mary exchange things through Jesus’ placenta. So we exchange with God: God sustains us, and we offer the sacrificial gifts of worship and compassion. I call this the doctrine of mystical intermingling, and I have patented it!

Then there is community. Embryonic cells that invade the mother lose self-identity and become a community. This is a wonderful example of the mystical body of Christ where we lose our self-hood in community. In cooperation we can be so much more effective than if we act singly. The light in a glow-worm comes from millions of luminescent bacteria – one alone is invisible, but when they act together it is a different story.

Given that we have this divine core within, why do we do rotten things like Peter, like Judas, like Pilate? Why, as Paul said, do we do what we know we shouldn’t, and don’t do what we know we should? Where do the demons come from? I look at newborn babies and see no evidence of them. But as Satan—however we choose to interpret that—entered into Judas, so Satan enters into us sometime during our exposure to life on this planet. There are spiritual battles going on in us all the time with demons that we need to guard against. There is a whole subject opening up as I speak: our biological urge to reproduce, our biological need of sustenance, the need to survive at the expense of competitors—all this set against community and common good. This is for another day.

Using my image of God implanted within, how do we allow this divine core to transform us?

Self-examination melts away the demons, allowing the divine spark within to fill our skins. It is painful when the light shines in our souls and we see ourselves starkly illuminated. But as Isaac the Syrian said, it is a spiritual gift from God for a man to perceive his sins. Only then can we repent. Isaac talks of three stages in the way of union: penitence, purification and perfection – that is to say, conversion of the will, liberation from the passions (detachment), and the acquisition of that perfect love which is the fullness of grace.

Mary is suffused with divine cells, she is divinized. She is a co-redemptrix. But remember, Mary is one of us, so we all share in this redemptive power if we choose to: we can all light the way for others. As the Divine within suffuses all our tissues, so we have the new creation happening in and around our cells. We are transformed from one degree of glory to another.

Charles Wesley was thoroughly grounded in this theology. His most astonishing hymn is Let earth and heaven combine. Here are some lines from it:

He deigns in flesh to appear, Widest extremes to join; To bring our vileness near, And make us all divine: And we the life of God shall know, For God is manifest below. … His love shall then be fully showed, And man shall all be lost in God.

Mary enables this mystical intermingling of human and divine. It is based on sound theology and, amazingly, on sound biology. In the words of Mother Julian of Norwich, the Saviour ‘began his work very humbly and very gently in the Virgin’s womb.’

My point is that the battle for salvation is not about doing stuff and ticking boxes, but rather about relaxing so that the Divine core can expand to fill our skins, pushing out the demons. Imagine these demons as imps when you recognise one, and send it on its way. There’s nothing like the light of day to make these creatures dissolve. But there is a never-ending supply of them, and they keep us in exile from that inner sanctuary. Here is a poem that talks of this inner kingdom, the holy of holies within that I suggest needs to fill us from the inside. It was written by a 20-year old C H Sorley who died weeks later in 1915 at the Battle of Loos.

From morn to midnight, all day through,

I laugh and play as others do,

I sin and chatter, just the same

As others with a different name.

And all year long upon the stage,

I dance and tumble and do rage

So vehemently, I scarcely see

The inner and eternal me.

I have a temple I do not

Visit, a heart I have forgot,

A self that I have never met,

A secret shrine—and yet, and yet

This sanctuary of my soul

Unwitting I keep white and whole,

Unlatched and lit, if Thou should’st care

To enter or to tarry there.

With parted lips and outstretched hands

And listening ears Thy servant stands,

Call Thou early, call Thou late,

To Thy great service dedicate.

1 thought on “Tuesday in Holy Week: love your enemies”