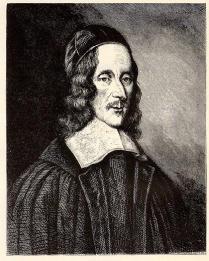 Adapted from the Church Magazine for this month

Lent is so early this year I haven’t had time to do anything much for a Lent course. I’m not impressed by the mediocre churnings of what passes for the minds of contemporary bishops and theologians, so given that the Church of England kalendar celebrates him on 27 February. I’m introducing my little darlings to George Herbert, a man at the top of my list for canonisation.

He was born in 1593 to a wealthy family in Montgomery. After Westminster School where he was tutored briefly by Lancelot Andrewes, another truly great mind, he went to Trinity Cambridge, became University Orator, and attracted the favours of King James I/VI. Then in his 30s he gave up this glittering life and was ordained priest, serving near Salisbury. He was feted for his care for parishioners and for providing food and clothing for the needy. (Oh to be a priest serving only one church and a miniscule population.) He survived three years of this, dying of tuberculosis in 1633. Do you suppose TB resulted from over-zealous ministry to the sick?

He left us his reflections on pastoral ministry A Priest to the Temple or The Country Parson, still regarded by some as a kind of works manual, though hardly relevant to today’s multiparish clergy, and a collection of poems The Temple. It is thanks to John and Charles Wesley that some have made it into our hymn books: Let all the world in ev’ry corner sing; Teach me, my God and King; King of glory, King of peace; The God of love my shepherd is.

Richard Baxter (theologian, Puritan, hymn writer) said, “Herbert speaks to God like one that really believeth a God, and whose business in the world is most with God. Heart-work and heaven-work make up his books”. Through his fellow poet Henry Vaughan, Herbert influenced William Wordsworth. His poetry has been set to music most famously by Vaughan Williams, and by others including Berkeley, Britten, Weir, and Walton.

There is something about Herbert that intrigues, fascinates, enthrals, and speaks to me heart-to-heart. His poetry is full of humanity, rantings, depression, perplexity, joy, ecstasy, Biblical allusions, theological concepts, and references to science and culture of the day. I’m not really much into poetry, so it’s presumptuous of me to make any comment, but nevertheless, I can’t resist a few.

In Teach me, my God and King he writes of the famous stone that turneth all to gold. The idea of being able to turn base metal into gold has long been a part of intellectual inquiry. In mystical terms it’s about something that can turn base humanity into the divine: an elixir that cures all ills—indeed this poem is called The Elixir. And Lewis Carroll must have taken his inspiration for passing through the looking glass from this poem.

In Aaron Herbert compares unfavourably his unworthy thoughts as he vests for Divine Worship with the vestments worn by the high priests in the Jerusalem Temple: rich, colourful fabrics with bells attached at the hem.

The God of Love my shepherd is: this is quite the best metrical version of Psalm 23. Why did H W Baker think he could improve on it? Maybe he didn’t know it, though I find that difficult to believe.

The Pulley: am I alone in hearing resonances of Pandora’s box?

Redemption: why does this put me in mind of Ursula Le Guin’s shocking The ones who walk away from Omelas?

Love bade me welcome. Look at the third line from the end: My dear, then I will serve. Who is speaking? Is it Love who speaks, ready to serve the meal? Or is it, as I increasingly think, “me” speaking, acknowledging that unworthy though I may be, I’m not so stubbornly proud as to refuse the meal set before me by the prodigally generous father? If so, ‘serve’ is used as we might say ‘OK, I’m not very good but I’m good enough: I’ll do”.

Perhaps his most striking poem is The Collar. This can’t be a reference to the clerical collar, for that wasn’t worn by clergy until the nineteenth century. It’s about a collar used to restrain an animal. The very human Herbert, like all clergy, chafes time and again at the restrictions that come with being a clerk in holy orders: things you can’t do, things you’d like to say but just can’t, things you don’t want to do but must, ways you have to bite your tongue, ways you must put the needs of others before your own, ways you have to bottle up your emotions for the sake of doing the job well (I still find it dreadful to do funerals of people with parents living). In this 36-line poem Herbert rants and raves at God until four lines from the end, when he’s brought up sharp:

But as I rav’d, and grew more fierce and wild / At every word, / Me thought I heard one calling, Child: / And I reply’d, My Lord

A lump to my throat every time.