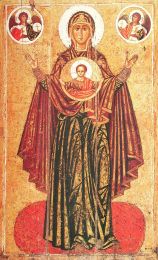 Mary’s uterus: wider than the heavens

From the Liturgy of Basil: he made your womb a throne and caused it to become wider than the heavens.

Margaret Barker’s first seminar drew almost 40 people. I was worried that we might not get double figures. The subject matter, the virgin shall conceive, touched upon early Hebrew images of God, one of which is the veiled (as in the veil in the Temple Holy of Holies), eternal queen mother of god. Accordingly, it is she who conceived, not a young girl from the sticks. These images have come into Christian traditions as variously Mary, spirit, and wisdom.

We heard how, before the book of Deuteronomy was written, a reformation expunged the feminine from the scene. Above all, I saw afresh that every detail in Luke’s story of the nativity had meaning for those who knew the traditions, swaddling clothes, for example, signifying the garment in which the King is wrapped at anointing (look on YouTube at videos of the 1953 coronation and you will see many of the same traditions).

The more you know, the more interesting it becomes and the more you want to know. It doesn’t matter that the stories might be fiction. If they are, they are intended to convey the importance of someone impressive and remarkable, whose message is life-changing.

I sometimes hear people say “I don’t think …” or “I don’t believe …” this that or the other. What I want to hear are the opinions of people who are well informed by research and study, not those who rely simply on prejudice or Sunday school pap. Nobody can say that Margaret is not well informed, so I’m intrigued by her views, and can let them kick about in my head. When it comes to ideas, I’m not an either/or person, more of a both/and. I love ideas.

None of this changes the doctrine of the incarnation. It enriches it. As the infant grows in the mother, her uterus is the entire cosmos nurturing this new way of looking at the world—the infant. This is an image in Wesley’s hymns and Orthodox theology. As we sing every Christmas, the infant can, must, should, “be born in us today” and every day. Every single one of us is, or can be, Mary—a god bearer. (Gents, if you’re worried that you don’t have a uterus, fret not. You do. It’s a little recess in the prostate gland called the prostatic utricle, a remnant of the thing that becomes the uterus in females. Never let it be said that you don’t learn a bit of mammalian embryology).

This is the Christmas story. It has nothing to do with making yourself sick on Quality Street and war films, or stuffing your face with dry turkey and fart-making sprouts, or Morecambe and Wise (never liked them). By all means celebrate the pagan festival and the end of the year and the winter solstice and spring not too far away; enjoy the hangovers and family rows and fallings out and being bored with each other, but remember the real meaning.

A recent Church Times article reports good news about church choirs. In places where they are nurtured, congregations grow and priests of the future are produced. Nurturing of course means spending money—you have to spend in order to earn dividends. A new organist at Modwen’s has reinvigorated music there. Summer concerts raised over £1500 for local charities, and drew in about 50 people every week, many of whom had not been before. It shows what can be done in just a matter of months when one puts one’s mind to something.

There seems to be no such enthusiasm at St Paul’s. This is a shame. I hear it said that church musicians should not be paid. Architects, plumbers, roofers, electricians, solicitors can be paid, but not musicians, despite the need for tuition, hours of practice, hard work. The organists we have do splendidly, but they’re not going to be around for ever. Actions, or in this case inactions, have consequences. Draw your own conclusions.

We’re at that time of year when people come to St Paul’s to get out of the warmth. I gather that recently one lady stayed for all of four minutes, reducing the congregation by one twentieth when she left. That was the Sunday I was preaching at Riverside Church on the High Street. Comfortable chairs and comfortable temperature are obviously a turn-off, for there were about 80 people there. Circumstances have consequences. Draw your own conclusions.

As it happens, I quite like the cold, but then I’m a man. Or a dog. Bedrooms should always be cold. It keeps down the germs multiplying. Maybe people come to St Paul’s to sleep—my eyesight is such that I can’t be sure from the pulpit. If I saw a student asleep in a lecture, I would pause, point him out (usually him), wait until he awoke, then ask if I could get him anything like a pillow, and tease him. Didn’t happen often.

Anyhow, back to the plot. We have a problem with the huge building that is St Paul’s. It’s difficult to know what to do about it. All ideas will be considered. But remember that what worked when you were young, pterodactyls flapping about the sky, is not necessarily appropriate now. So think. Pray if you like (actually, praying is thinking), and try to imagine a future even though you won’t be around to enjoy it.

I’m 70 on 6 June 2020 and am obliged to say bye bye if I haven’t gone before. Will I be replaced? That’s doubtful given that my three churches together don’t support the cost of a fulltime cleric—you are subsidised. That may well be appropriate, for I can’t see that this parish will ever be self-sufficient, but the diocese/deanery may take a different view. What sort of clerical service do you want? What sort does this part of town need? Do you care? Maybe all that matters is having a priest for Sunday mass.

The YMCA approached us about hosting a night shelter for Burton homeless, December 2017 to March 2018. The PCC agreed. Of course, there are concerns and I share them. But YMCA are professionals and it’s not in their interest to get it wrong. And the truth is that if we never took risks we’d still be scrabbling round in caves. It’s absolutely right that as well as learning and beauty and worship we should be concerned with social action. It’s a gospel imperative. It might help carve out a role for this church in this part of town.

Gregg’s made headlines recently with an image of a manger with a sausage roll instead of the infant. It offended some Christians for obvious reasons, and Jews and Muslims because at least in theory a sausage has pig in it. But it has to be said that “Lord Jesus” backwards is susejd rol. So maybe it was a satanic plot. Anyway, it just shows how crass Gregg’s advertising team is, and confirms that all advertising is satanic.

Happy Christmas or nativity or solstice or sausage roll or end of year or whatever. In obstetric terms (back to the uterus), happy celebrations of the delivery of the infant King from the uterus of the veiled queen mother of God. And remember above all else that Christ is born in you today and every day. Raise a glass or six to that.