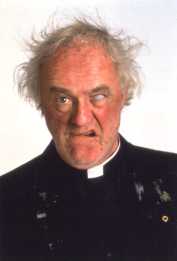 There are two occasions in the liturgical year that I heartily dislike.

The first is Mothering Sunday, or Mother’s Day as people call it these days. Its original incarnation as the time for a pilgrimage to the mother church might have been OK. Its modern incarnation, with the gooey stickiness of sentimental femininity, I can hardly bear. No wonder some men find church too girly. And what about women who’d love to have had kids but can’t? It’s an excuse to get a visiting preacher.

The other is harvest. As you know I was brought up in an agricultural community and the farming year mattered greatly. At this time of year there was tatie-picking week, which coincided, deliberately—thanks to Cumberland County Council, Latin motto on school exercise books Perfero, I finish what I start—with school half term. I have some memory of rosehip week when we scoured the hedgerows for the bulbous scarlet objects to take to school for collection—3d/lb. In an urban context I see no point in harvest. In Burton upon Trent wouldn’t we be better off having some festival celebrating beer or Marmite or light engineering or Rolls-Royces or Toyotas or trains?

Harvest festival is a recent invention, 19th century. A Cornish vicar decided that the church was irrelevant to most of his people (nothing changes), and that having a harvest festival to connect church to the lives of his agricultural parishioners might do the trick. It didn’t work.

The thing I really find distasteful about harvest festivals is the sense that because the land has yielded its increase, we are especially favoured by God. One implication is that God looks with disfavour on those people living in places where the land is barren and infertile—as if the people who live there are inferior to us in northern Europe, where the climate is governed by the gulf stream that arises from the same set of phenomena that yield hurricanes in the Caribbean.

Never mind. We bring our packets and boxes and tins for distribution to the homeless by the YMCA and so feel good about ourselves. Bollix to that.

You may think this is just a dyspeptic vicar writing. You may be right. Another excuse for a visiting preacher.