Mrs Windsor née Middleton is pregnant. It’s in the newspapers so it must be true.

First, I have to get this hobbyhorse off my chest. The correct spelling of fetus is fetus, not foetus, the word being related to felix, femina, etc. The incorrect spelling occurs first in the late writer Isidorus (570-636 AD) who fancied that the word could be derived from foveo (I cherish) instead of feo (I beget). So there.

Now to the hard stuff.

Is it an embryo that is taking root in Mrs Windsor’s genital system? Yes indeed. Is a fetus? Is it a baby? Is it a child? Embryo and fetus are defined by convention: you can look them up if you like. Baby is a meaningless term. Is it a parasite? Well, it steals mama’s nutrients and dumps its rubbish on her. It guzzles into her flesh so that its placenta can plug itself in to mammy’s tissues and get up close and personal with her blood vessels. It consumes the contents of parental wallets for at least two decades. Make up your own mind.

Some people worry about when the fetus becomes human. Not I. It’s human because the spermatozoön and ovum that produced it came from gonads belonging to humans. Reputedly. Anyhoo, however royal this fetus may be, it’s also a chordate, a vertebrate, a mammal, an ape and a primate. This is much more important than royalness.

The royalness will doubtless induce the Church of England to produce a prayer for the royal products of conception—it may already have done so—the usual crass, meretricious, tendentious, wordy drivel that comes from Lambeth. Products of conception include placenta, amnion, chorion, umbilical cord. Are they royal too? Are we to have a prayer for the royal placenta? Will a specially consecrated pair of scissors be used to cut the royal umbilical cord?

When do you think it should be permissible to kill the fetus? Or perhaps, when should it no longer be permissible? Well here’s the thing as I see it. Despite what the law may say, there is no single moment during the whole course of pregnancy at which the fetus is significantly different from what it was the moment before. There is no event that takes place that sufficiently differentiates what the fetus was before that event from what it is after the event. Fetal development is a continuum. From this point of view, if it’s permissible to kill a fetus at 18 weeks, then it’s permissible to kill a postnatal child or an adult. For those of us who have a little list of people not one of whom would be missed, this is comforting.

Why are we born when we are born?

The short answer is nobody knows. Brain size must have something to do with it. If we stayed inside any longer, our heads would grow so big that we wouldn’t be able to get through mama’s pelvis. But like I say who knows?

We are born very immature. A newborn horse can canter off pretty soon after birth, but not a newborn human. Unfortunately. Neurologically (spinal cord tract myelination—look it up), some of us mature more quickly than others. If earlier, we shall be better at physical activity and sport at an earlier age. If later (like me, dear reader), we shall have the shit kicked out of us at school for being physically inept. 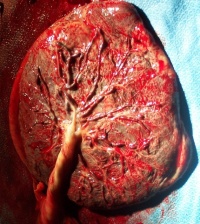 Placenta in Latin means flat cake. It is a most interesting organ, much under-researched. Its evolution is fascinating. Some mammals have lots of little placentas. Some, like mice and humans, have a single placenta. A primate (therefore human) placenta is about the size of a small pizza. Looks like one too. Some twins have separate placentas, some share.

A mouse placenta is similar in size to the head of a small drawing pin. Believe me, I know. I’ve dealt with hundreds of them in my time. When our three products of conception were little, the eldest drew a picture of me at work with the caption “my daddy studies mices kidneys”. Adrenals, actually, and fetal ones at that, but the gist was spot on. She had not mastered the apostrophe by that stage (like an increasing number of adults, but don’t get me going), but had grasped that plurals are normally formed by the addition of a terminal s, and that in conjugating the verb ‘to study’, y sometimes becomes ies. Pretty good, huh?

Please understand, dear reader, that the placenta is fetal. Entirely fetal. The only bit of maternal tissue that comes out with the placenta is that which is torn away from the uterine lining when the placenta detaches itself, hopefully after birth. This is why bleeding may occur.

The placenta, like the infant that it nourishes, is a foreign organism as far as the mother’s immune system is concerned. Why is the placenta, which comes into intimate contact with maternal tissue, not rejected? Well, sometimes it is. And so arise spontaneous abortions and other obstetric headaches.

A bit of history

In the fourth, fifth and sixth Egyptian dynasties the placenta was held to be the seat of the external soul. There existed the ceremonial position of Opener of the King’s Placenta. Some have suggested that in Abigail’s flattery of King David (1 Samuel 25:29) she calls on this image, the ‘bundle of life’ (KJV) being the placenta, though this is not mentioned in recent Biblical commentaries. Some societies suppose the placenta to be ‘the twin brother or sister of the infant whom it follows at a short interval into the world’ — and in a way, it is. In central Africa a belief in reincarnation leads to the afterbirth being buried at the doorway, or under the threshold of a hut, practices connected with the divine doorkeeper and the widespread custom of carrying the bride over the threshold.

The great fry up

And now, children, finally for today’s “Listen with mother”, remember that the placenta is a most nutritious organ. It’s not that different from black pudding: blood, connective tissue and other bits and pieces.

Fried with eggs, mushrooms bacon and tomatoes it would make a right royal breakfast.

2 thoughts on “Placentas and pizzas”