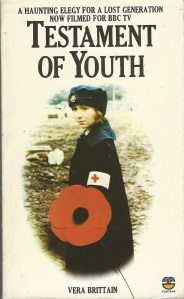 The Civic Service on Remembrance Sunday 2015 at S Modwen’s Church, Burton upon Trent

It was a woman of Staffordshire and Derbyshire who alerted me to the valour and courage of those who waited, supported and loved from afar. I’m talking about Vera Brittain and Testament of Youth. At the risk of boring you with more of my viewing habits, I refer you to the 1979 BBC TV production, available on YouTube if you’re interested. I remember two of its most powerful scenes: Vera at the telephone hearing of Roland Leighton’s death, and later, so sadly near the end of the war, Mr Brittain reading the telegram informing him of his son’s death.

My wife and I went to Texas in September to see our son and his family. One of the few pleasures of breathing recycled farts for half a day is the possibility that there might be a decent film to watch, and so there was: the 2014 film version of Testament of Youth. I thought as I watched that my theme for this 2015 Remembrance Day sermon would be those who, like Vera Brittain and her parents, “also serve who only stand and wait”.

So as well as those who have died and those who have been maimed, physically and psychologically, we remember the bereaved: the Vera Brittains, the mothers, fathers, lovers, sons, daughters, and friends. Those who wonder “what was it all for?” We remember that behind the ceremonies of this week there are countless stories of real human tragedy.

Now, please allow me a personal note. I decided on this theme about six weeks ago. Then, just two Fridays ago at 9.15 in the evening I had a telephone call from Texas telling me that my son had died in his sleep. He was 38 years and three days old. He leaves a wife and a daughter, a sister, a brother, a mother, countless friends on at least two continents, and a father. Now I am Vera Brittain receiving the phone call, I am Mr Brittain reading the telegram. Now I begin to understand what it was like, and is still like, for those who feel that part of them has died when they receive that shocking news. “Stop the clocks” does not even begin to express it adequately.

But among the desolation, I glimpse shoots of new life. I see that entombing oneself in memories and glorifying the past will not do. I see that the best way of trivializing an event and refusing to learn from it is to arrange an act of commemoration, then forget about it. This must not happen to me, or to us.

Nationally and individually, shoots of new life grow when we look into ourselves. We are all warmongers on a small scale: we think our opinion more important than someone else’s, we seek revenge, we won’t let go, we think we need to get the better of someone at Scrabble, or win petty arguments. I sit impatiently at traffic lights fulminating about why the old trout in front is waiting for a particular shade of green. Magnify that and put it in a different context, and we have war. We should remember how every evil act begins as a thought in someone’s head, and how every one of us must keep guard over our thoughts to nip the problem in the bud.

Today I urge you to think of the word remember in a different way. If dismember is taking apart, remember is putting it back together again. The King’s horses and King’s men couldn’t put Humpty back together again, because Humpty has to do it for himself. We must—I must—acknowledge the grief of loss, but then let go so that unlike Miss Havisham we are not trapped in the past. This is just as important for nations as for individuals. Look at the world and you will see.

We have the key to this in the first reading: Do justly, love mercy, walk humbly. And how do we walk humbly? Hear the second lesson: look into your own heart and see your poverty, your perplexity, your sadness at past hurts. These are your enemies. Love your enemies. They are inside you. Love them and you will move beyond them.

Today is about more than remembrance. It is about resolution to work for justice, and release of past grievance.

This is hard work, but in the words of Dorothy Fields, alluded to by Barack Obama at his inauguration:

Will you remember the famous men / Who had to fall to rise again? / So take a deep breath / Pick yourself up / Dust yourself off / And start all over again.

2 thoughts on “They also serve who only stand and wait”