This is not mine. It comes from the website of the Association of Catholic Priests http://www.associationofcatholicpriests.ie. If I knew whom to acknowledge, I would.

It contains this wonderful line: Often the gospel is diluted to accommodate the prejudices and lifestyle of the parishioners. 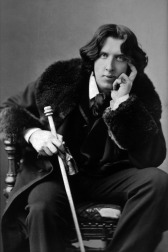 Admirers have suggested that the brilliance of Oscar Wilde’s plays was only surpassed by that of his conversation. He was a superb raconteur whose conversational offerings were heavily laced with irony. He had a particular penchant for parables, often recounting them in the style of the gospel narrative. Here is one of them. “One day, an unknown man walked down the street. It was the first hour of daylight and people had not yet gathered in the market place. The man sat down by the wayside and, raising his eyes, he began to gaze up to heaven. And it came to pass that another man who was passing that way, seeing the stranger, he too stopped and raised his eyes to heaven. At the second and third hour, others came and did likewise. Soon word of this marvellous happening spread throughout the countryside and many people left their abodes and came to see this stranger. At the ninth hour, when the day was far spent, there was a great multitude assembled. The stranger lowered his eyes from heaven and stood up. Turning towards the multitude, he said in a loud voice: “Amen, amen~ I say unto you. How easy it is to start a religion!”

To start a religion, as Wilde observed, may not be that difficult, but to ensure its survival is quite another matter. People are gullible. Futurists predict a growth in religious activity in the 21st century. For them it forms part of the leisure industry which is expected to expand dramatically. Whether one should greet this prediction with joy or apprehension is a matter for debate. A purely statistical increase in church membership is a dubious gain. What counts for Christianity — indeed, what ensures its survival — is not external but internal growth. What is required is not more members of the Catholic Church, but better disciples of Jesus Christ.

Mere membership and full discipleship are worlds apart. Christianity has always suffered from a surfeit of members and a shortage of disciples. Humans are social animals and crave to be associated. In a world grown cold and depersonalised the churches offer a comfortable ambiance of friendship and security. Often the gospel is diluted to accommodate the prejudices and lifestyle of the parishioners. Few preached fearlessly enough, like St Paul, to risk their livings, let alone their lives. The radical Christ is made into a benign bishop and the collection plate registers members’ approval. Too many withered branches remain un-pruned.

St John tries gently to prod us into discipleship. “My children, our love is not to be just words or mere talk, but something real and active.” You won’t meet Christ in your Sunday liturgy, if you haven’t rubbed shoulders with him in the office, in the factory or in the kitchen. You won’t hear his message from the altar, if you were deaf to his call at your office desk. Jesus put it simply and bluntly: “It is to the glory of my Father that you should bear much fruit and then you will be my disciples.”