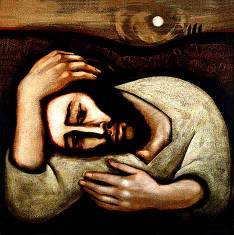 Plenty people tell me they don’t need an imaginary friend to help them get through life. I’m not sure I do either. There’s nothing imaginary about the events of Holy Week: they happen all the time.

Take the Passion narratives—three obvious headings: (1) failure to confront reality, that is to say, denials; (2) mob justice; and (3) evasion of responsibility.

Denials. Peter’s denials saved his skin—but only for that moment. Later, he wept, overcome with remorse. It’s hard to hear today’s news without being confronted by denials. How can a head of state deny his part in a situation that sees the bulk of his people starve while he lives in luxury? How can a politician say what is self-evidently not the case? Is anyone guilt-free? Who has not tried to get something for nothing, or used work time for personal business?

Mob ‘justice’. Men fighting in Manchester car parks on the news yesterday. FaceBook bullying. One story from 2007 sticks in my mind. In March of that year, The Times reported, a young man was surrounded by a gang with wooden sticks. Witnesses say that teenage girls egged on the attack with shouts of “Kill him, kill him.”

Evasion of responsibility. Pilate wriggled out of responsibility and washed his hands, the act of appeasers everywhere. Pilate needed to please his superiors. Sound familiar? Do you know a public service that is quick to take responsibility for its cockups? A politician? A banker? It’s easy to pick on them because they set themselves up for it.

We all make mistakes. We’re greedy. We want the dividends if we’re lucky enough to have money invested. Our pensions depend on them. We’re all complicit in all this, the sin of the world, and the consequences will run and run for generations. I accept that, and I can’t and don’t condemn anyone for faults that also afflict me. But the arrogance and lack of remorse that we see in public life is something else. According to the Gospels, Jesus was censorious about very little, but always, always, always about hypocrisy and complacency. Do you remember Josef Fritzl who locked up some of his family for almost 30 years? Even he seems to have acknowledged, eventually, the enormity of his actions after being confronted by his daughter in court. If you want Fritzl on a big scale, think of North Korea, where people are walled up for their entire lives.

The three headings can in truth be compressed into one: the sin of Adam—trying to be what we are not. The fig leaf has nothing to do with covering up our genitals, but is about covering up our naked selves by putting on a mask, a persona to hide our true faces. We deny the truth because of our need to save face, but it’s not the face that suffers. It is the inner self that I harm when I deny what is evident to others. This inner self that is, in my theology, the Christ within, the Divine within. When we harm others, we wound the Christ within them and we wound the Christ within ourselves, as surely as any nail on the cross.

Life is a struggle, and for most people on the planet it’s more of a struggle than it is for you and me. I look around and see the beauty and fragility of creation. One man’s illness results in the death of a plane load of people. Creation is constantly beset by terrible acts of evil, appalling events everywhere. Hundreds of innocents are slaughtered in power struggles: one group of people trying to control others. I hear of it even in my own land, my own town: abuse, slavery of one sort or another. “At times it almost seems as if the very stars are being wrenched from heaven by some evil force” * — which is exactly how the events of Good Friday are described in the Gospels.

This urge to the inhuman is in us all somewhere. Evil, badness, cruelty all begin as a thought in someone’s mind. When someone decides to support the things that evil people do, that decision begins as a thought in someone’s mind. When we are tormented by what to do, when beads of sweat start forming on our foreheads and drop like grapes to the floor, we are experiencing something of the mental agony that we hear of in the Garden of Gethsemane.

The story of Adam and Eve in the Garden of Eden attempts to explain why we humans so often get it wrong. It illustrates that when we choose for selfish reasons rather than for selfless reasons, we disturb the cosmos. It explains why we so often hide behind masks, spiritual cosmetics, spiritual fig leaves, rather than stand in full frontal nudity before the Divine.

Every choice begins as a thought. We need to be aware of our thoughts because we need to choose wisely, to have courage to stand for truth and right, to have courage to be nonconformist, and stand up to those who try to persuade us to do what we know we should not. We may be laughed at, scorned, cast out, sneered at. But from this suffering we grow in self-knowledge, and growing in self-knowledge, with all the shame and joy that such growth brings, is a step towards growing into the Divine. We have a guide.

* thanks to The Revd Elizabeth France