Please excuse me: I’ve written about this sort of stuff before, but I can’t stop myself doing so again.

TV adverts at the moment tell us: for the first time as many people survive cancer as die from cancer; together we’ll beat cancer; soon nobody will die from cancer.

What nonsense! It’s emotional manipulation to get you to give to cancer research.

If you don’t die from cancer, then what will you die from?

Maybe you think you won’t die at all. Maybe you’ll live for ever like the struldbrugs in Jonathan Swift’s Gulliver’s Travels, increasingly opinionated and cranky (some of us are like that already). At 80 years of age their marriages were dissolved because no two people could stand each other any longer, and they became legally dead, no longer able to own property. This is not unattractive: no taxes, no responsibilities, no leaking roofs to worry about.

Somehow, unlikely though it may seem, I think Swift was taking the piss.

Life is a terminal condition. Deal with it. We invest so much in doctors and drug companies because people can’t come to terms with that fact. We imagine that the next new drug or treatment will allow us to live for ever—or at least, for that bit longer.

Imagine you’re expecting to kick the bucket any day, then a new drug unexpectedly becomes available and you are told you have an extra month. What will you do with the extra days? Will you travel to where you’ve always wanted to go? Will you write your life story? Will you make sure that the people you think are gobshites know your opinion of them? (a very tempting option.)

When my mother was on her last legs with secondary cancer, she was put on morphine and had a couple of months at home. She asked me what to do. I said if I were her, I’d get a train ticket and go places I’d never been, though by then she was too ill to bother. After she died, my father bought a deep fat fryer, so that was soon the end of him. If we don’t die of cancer, I suppose heart disease will be the killer. Or murder—if the struldbrug character changes are an indicator.

What will it be for me? Road traffic accident? Heart disease (I like eggs; I like salt)? Cancer? Quite possibly cancer. I’m a bit of a worrier and there is evidence of cancer-genes in the family. Now just so you get this straight, cancer is not a disease, it’s a side-effect of ageing: the longer you live, the more likely your cells are to go out of control. Also, cancer is not God’s judgement. Cancer is not a punishment. Cancer, like so many other things, is just stuff that happens. 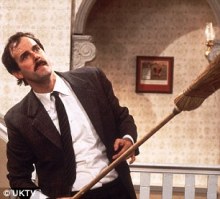 Back to the plot. The beginning of the year is a good time to make peace with people you know you’ve offended or hurt. You might tell people who’ve hurt you that you bear them no ill will. You would then have a lighter heart, carry fewer burdens, and live more serenely. You can start this now, by living each day as if ‘twere thy last. Because it jolly well might be.

Wiping out this disease today means you die of something else tomorrow. Life—to repeat—is terminal, and you never know when the game’s up.