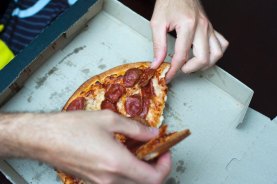 Is it a National Trust shop? No. I see why you might think so, but no.

Maybe a Cathedral shop? Getting warm.

It’s a monastery shop. Stanley is on retreat.

‘Will you be getting up at three for Vigil?’ Hollow laughter. ‘How about Lauds at seven?’ I think not. As it happens, I slept most of the three days.

I had hoped not to have to speak much, but words were forced out of me at meal times, for others were nosey. There was a large dishevelled old man (other than me) who managed silence—I rather warmed to him as he shovelled food into his oral cavity at a rate that beat even me (you learn to eat fast as a hospital doctor between bleep calls). Though there was a bit of camaraderie over the Fairy liquid (we had to wash up; no pampering here), I did my best to say as little as possible. As is my wont.

I’ve not been on many retreats, but what will stay in the memory about this one was watching the retreatants serve themselves at meal times. Movements were slow and deliberate, as if on the moon, and accompanied by smiles and nods of the head. One extremely ‘nice’ couple—let’s call them Candice-Marie and Keith—similar age to me, were so very eager to help everyone else. Frankly I find that sort of thing majorly irritating, almost patronizing, but hey that’s just me.

As I was leaving, Keith happened to be in the vestibule (had he been waiting for this?) and said ‘I wonder if I can have a word with you’ in a very gentle and breathy voice, very meaningful. Then, with his head slightly inclined to one side, a gentle smile on his face, and a very caring wrinkled forehead, he said ‘It’s Stanley isn’t it?’ Without waiting for confirmation he continued ‘I’d just like to say I’m a nurse, and I think you should know that eating your food with your hands [can you eat pizza with cutlery?] can be dangerous, what with allergies and infections. There are bacteria on your fingers and they can cause disease.’

What do you think I did next?

I tell you, I am very proud of myself. I said ‘Thanks a lot. Bye’. Then I turned round and left the building,

5 thoughts on “Retreating with dignity”