Once upon a time we had more disposable income than we do now. So we paid more tax and wasted more money. One of the best ways I’ve found to waste smackeroonies is on train trips. London-Brussels-Cologne and onwards. People look east.

German Christmas markets in November are something else, with fairs and stalls laid out in town squares in the shadow of the great church and the Rathaus. One year we found ourselves in Augsburg and Lindau. Lake Constance is just magic. Another year it was Koblenz, Limburg and Mainz. On both trips we had a night in Cologne, so we enjoyed the huge Christmas Market there. Lights twinkle in the frosty air; traditional music mingles with the aroma of glühwein and würst. Sustained by the delicious fare, we wander increasingly waywardly (glühwein) among stalls displaying local confectionery and handiwork. It reminds me just how many of our Christmas traditions are Central European in origin. We picked up a rather good Jesse tree icon in Cologne. 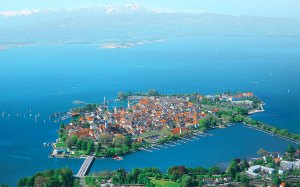 One of their customs that might do me some good is waiting until Boxing Day to open presents. As parishioners and my regular reader know, I’m possibly the world’s most impatient person, so I say this not as a killjoy, but rather to remind myself that a bit of waiting, however tiresome, increases the joy.

It’s waiting that Advent should be about, instead of which the evil advertising industry has assailed us since September with they call the ‘run up to Christmas’, presents, trees, food, booze and generally getting ready for the winter solstice. ‘Let’s get Carol Services out of the way’ (my first is on a stupidly early 5 December), ‘so we can get on with important stuff like planning TV’, presumably as a background to family rows. Advent is obliterated in all this frenetic activity.

So I tell myself, have a rest. Half an hour every now and then is better than nothing. Find something or someone who lifts my spirits and makes me smile. Find a friend who radiates energy, and avoid people who drain my life force like a vampire—there are plenty of them. Lionel Blue is always a radiator, and his advice for starting the day is to recall some proud moment of yesterday. I’ll see if I can dredge one up from what passes for a memory.

Find radiators, avoid drains. And they all lived happily ever after.

2 thoughts on “The run up to Christmas”