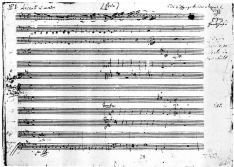 We were in Hugh’s truck on the way from San Antonio to Fredericksburg in the Texas Hill Country. A day out. Muzak was oozing from the speakers. Quite without warning Mozart’s C minor Mass Kyrie began. I can’t quite find words for the effect it had on me at that time in that place, but it was something like being jolted by an electric shock in an instant into the fullest sort of life imaginable.

‘This is the best thing he ever wrote.’

‘They used it in A Very British Coup, with Ray McAnally.’

‘There’s a bit in the Sanctus that quite bowls me over.’ 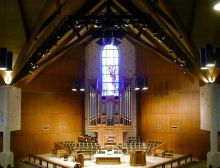 The following Sunday we were at the local church. Plush, wealthy, comfortable, striking modern stained glass, acolytes in albs, candles to gladden my heart (yes, Methodist candles!), a lovely two-manual mechanical action organ by Rosales of Los Angeles—and they let me play it. The church orchestra featured. I must say, though, it was rather like a diet of honey both musically and theologically. Not soporific exactly, but certainly tending to make me wonder if I was in Stepford.

The contrast between the two musical experiences was remarkable. Mozart electrifies, muzak stupefies. Mozart—that Mozart in particular—exposes in an instant that central vacuum in my being that longs to be embraced. It tears apart the layers of ‘show’ that collect like dental plaque. It brings home to me, yet again, that all ‘this’ is vanity. It explains, yet again, why my best sermons are written under the influence of music, for it’s not long before whatever comes through the headphones bypasses conscious hearing and unlatches the sanctuary of my soul. The sad thing is that it is so expensive of emotion and self that I don’t do it often enough. My kingdom is an inner kingdom.

4 thoughts on “This sanctuary of my soul”