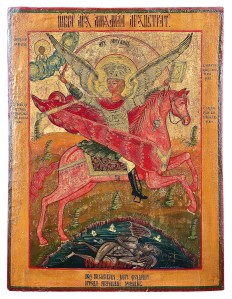 The Old Testament is often not a nice place to be. And Jacob, the younger twin son of patriarch Isaac, and Rebekah his scheming mother, are hardly nice people. Isaac, father of Esau and Jacob, could have been in the original Specsavers advert … the myopic shepherd who can’t distinguish between the sheep and his sheepdog and shears the lot. Isaac should have gone to Specsavers: with the connivance of Jacob’s mother he blesses Jacob instead of the older twin Esau, so Jacob gets Esau’s inheritance.

Jacob is not in a good place. Physically, he’s alone in a barren wilderness with only a stone for a pillow. Morally his position is woeful. However, Jacob has this glorious dream: a ladder reaching up from the cold and isolated place, where he is, up to glory of heaven. And on that ladder is a two-way traffic: angels going up, and angels coming down—and that is important to note. The ladder isn’t a way of escape, but provides, rather, an enrichment of the place where Jacob finds himself—enrichment with the angels of God, no less.

What angels do is announce the presence of God. Greek angelos = a messenger. You might think that they would get a pretty good press; there is, after all, that beautifully poetic description of Gabriel in the carol (The angel Gabriel from heaven came, his wings of drifted snow, his eyes of flame). Simon Barnes, in his The Bad Bird Watchers’ Guide begins with the robin, and describes its natural habitat: Christmas cards. We might give the same natural habitat for angels … or look in the north nave of S Paul’s, over there, at the glorious Archangel Michael, his wings spread wide, his lance striking home. He shall defend thee under his wings and thou shalt be safe under his feathers: his faithfulness and truth shall be thy shield and buckler! What could be more welcome, what could be more attractive?

But not so fast. What angels consistently generate in those to whom they go, however, is not safety—far from it: it is fear.

Mary, above all, is greatly perturbed by Gabriel’s annunciation. The archangel had to encourage her not to be afraid, as did the leader of the angelic choir that appeared to the shepherds watching their flocks by night. At the other end of the gospels, the various visitors to the empty tomb are thrown into turmoil and fear by the presence of these emissaries of God, these ambassadors of heaven; just as Jacob was in the Genesis story.

Jacob is between a rock and a hard place. Not just physically—cold, alone, with rocks for his head and his feet—but personally, for he has yet to face his elder brother whom he cheated, and suffer the consequences of his actions. Jacob has to face the truth. The ladder between heaven and earth is not an escape route from his situation, but it provides a sign that heaven will come down to him, and the truth will somehow set him free.

This hard-headed and down-to-earth understanding of the meaning of angelic presence belongs to a non-tacky celebration of our faith. God knows, there’s enough of the other: the sickly sweet escapist religion within easy reach, encouraging us to climb up, up and away from the rock and the hard place into the fluffy clouds of never-never land. But, this is not the land of Enid Blyton’s Faraway Tree; and, as the reading from the Book of the Revelation reminded us, there is war in heaven anyway, just as there is in all of us.

What we have to do is grow up in our faith and into confrontation with the truth, just like Jacob, and see that his ladder has its feet set firmly on the earth, not for escape, but so that angels can descend. We find our salvation where we are: the glory of heaven comes to earth – as it always has and as it always will.

Let earth and heaven combine, Angels and men agree, To praise in songs divine The incarnate Deity, Our God contracted to a span, Incomprehensibly made Man. (Charles Wesley)