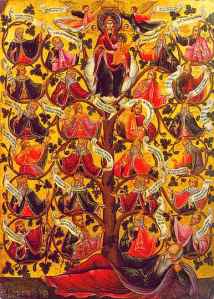 Right, so. I sorted out how to do a Facebook (? FaceBook) page for the churches. I managed to do it for an organization rather than for an individual so was quite pleased with myself. This is in preparation for a website.

It took me a while because I’m 64 and these things don’t come naturally at an age when many of us are worried about letting angels prostate fall around our ankles. And, it has to be said, in my former lives I’ve always had people to whom I simply had to utter a command and lo, it cameth to pass. Not now I fear. So gird up your loins, young man, or what’s left of them, and show the virtual world what you’re made of.

I emailed my many friends and asked them if they would be kind enough to ‘like’ the Facebook page so that it would begin to be noticed by the great noticer of things in the firmament of heaven which must now be stuffed full of things jostling to be noticed. So full, in fact, that the aether is getting thicker and thicker—have you noticed?—and moving is more and more difficult. Either that or gravity is getting stronger by the minute. Anyhoo, back to the plot. As I say, I emailed friends and asked them to like it.

You would be astonished, Bruce, just how many darlings responded by saying something like ‘well actually, I don’t do Facebook’ or ‘I can’t get the hang of these twitter things.’ Astonished. You can, I hope, read the smell under their noses. All of these hoity-toity people, be it noted, were English, not Irish. It is noticeable that clergy colleagues in Ireland were on Facebook much more often than English clergy. Perhaps this is because Church of Ireland clergy have fewer calls on their time (seriously, this will get another blog), but whatever the reason, Irish folk are much more meedja savvy than English folk of similar age. What d’ye make of that?

Now to the website. The possibility that I might do one (‘seek to do one if it is the will of God’ in C of E speak) was dumped upon by a whole load of nay-sayers. I can understand that church people of an age when incontinentia buttox begins to loom might feel that such things are not for them, but unless they grasp the concept that the church has to deal with the world as it is and will be, rather than as it was when they were young and Napoleon was in Paris, we are more likely to be, as Private Fraser used so eloquently to say, doomed.

On the grounds that there is a tide in the affairs of men. which, if not taken at the flood, leads on to extinction, I thought the best thing was simply to JFDI. WWJD? He’d JFDI.

So Website-Ho! as Charles Kingsley would have said.