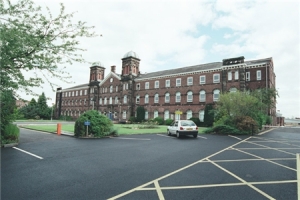 Carlisle hospitals saw quite a bit of me when I was young. Chatsworth Square Nursing Home took my tonsils when I was about 5. All I can remember is dark green walls and glass partitions. The Ear, Nose and Throat fraternity made me one of theirs after that, with a sinus job, two nasal polypectomies and an operation on the nasal septum when I was about 17. Somewhere in all this came appendix, two teeth operations (they’re wonky at the front), and an arm job. Mostly, I was at the City General, but the appendix and arm were done at the (old) Cumberland Infirmary where for the appendix in 1960 I was in Ward 18 opposite grandfather W P Monkhouse, then in his 80s.

For one of the nose jobs I was in a side room with a boy from Workington whose sister was called—and this is what it sounded like to me—Hughery. I’d never heard of that name and asked him to say it again, just to be sure. Yes, it sounded like Hughery. So that’s what I said. It wasn’t until years later that it dawned on me that it was Hilary, and he was probably in for a palate operation, so pronouncing ‘l’ was a problem. He thought he was saying Hilary and I heard Hughery. No wonder he was cross with me: I suppose he thought I was making fun of him.

One thing illness does for you, popular wisdom has it, is make you patient. It makes you take each moment as it comes. It teaches you not to have too many expectations. You learn that when doctors say you might be home at the weekend, you equally well might not. You learn to laugh off these little disappointments. When you expect to be going for an operation on Tuesday, and it’s cancelled because you have a chest infection, you learn to take it in your stride. That’s what popular wisdom says illness does for you.

Let me tell you that popular wisdom is piffle. Complete twaddle. Especially if you’re a child. As is well known, I am the most patient and even tempered of God’s creatures, but not even I was able to bear with equanimity the unpredictability of illness. I was in despair when some sign of progress did not materialize as I thought it should.

My nose would have been less inclined to run in the family had I not had cow’s milk shoved down my throat ‘when I were a lad’. It should come in bottles marked ‘poison’. Cow’s milk for cows, human’s milk for humans. It’s a snot generator. In the 1990s an Ear, Nose and Throat colleague told me my nose would be better if I stopped milk. I have, except in tea, and it is. The other thing that affected me was grain and meal that, since my father ran an agricultural feed manufacturing plant, put money in our pockets.

Milk and wheat are not good for Rambling Rector. I wonder how different my life would have been if I’d known sooner. As for cats, which always know that I’m allergic to them, the best place for them is under the wheel of a heavy truck.

One of Grimm’s Fairy Tales has a man whose nose grows so long that people trip over it.