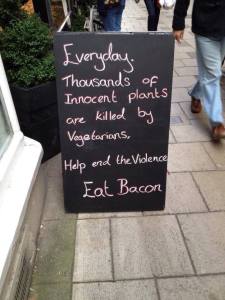 Animal experimentation is certainly an issue that polarizes. I wonder how many opinions are based on facts and experience rather than sentiment and propaganda. How many of those vehemently opposed are principled enough to refuse antibiotics, or question how they were tested?

For several years I worked on the mammalian adrenal gland. The mouse Mus musculus was the creature of choice. I could not have done the work without killing. The question is: was it worthwhile?

Zhou Enlai, when asked about the importance of the French revolution, is reported to have said that it was too early to tell. I feel rather the same about much research in general, and mine in particular. I certainly don’t claim it to have had any impact, but this is not to say that in the future someone will not build upon it in a way that enlightens us about endocrine processes.

Headline-grabbing results are rare. Scientific research is like chipping fragments from a stone, a sculpture gradually emerging. Researchers build upon the work of others, and slowly, slowly knowledge accumulates. After a great deal of accumulation, conclusions can perhaps be drawn. It is dangerous to draw them too soon.

Yes, there are alternatives to animal experimentation, and they are increasingly used. More will be developed. But, in the words of my friend Andy, ‘at the moment they can’t simulate the real deal because mammals are so delightfully complex and still so poorly understood—despite the hubris of the scientific community.’

Is animal experimentation evil, immoral, bad? It concerns me that too much is done simply as CV boosting, as truthfully in my case, and there are problems with the way that research is politicized by factions and industry, but that’s another story.

I suspect that opposition to animal experimentation is most vociferous among those who are furthest removed from living and working with animals. You won’t find much opposition in the agricultural community. If you hold that all creatures are God’s creatures like us, then the only logical position is Jainism: non-violence towards all living beings. How do you define living? Plants? Fungi? Bacteria? Slime moulds? Clergymen?

Much of what we know of how the inner ear works comes from research that was done on human subjects in 1930s and 1940s Germany, in circumstances that may well appall us. We have benefited from that research not least in the development of hearing aids and cochlear implants. Knowledge of some neurological conditions comes from experiments on monkeys and apes. It’s all very well to object—until, that is, you get the disease.

When we lived in Nottingham, our children attended a school patronized by sandal-wearers, amongst whom there were more than a few objectors. Our children said “my daddy works with mice’s kidneys” (kidney/adrenal confusion understandable at that age) and drew pictures of my office. I did rather fear reprisals.

I was a reluctant researcher—a disappointment to the eminent Professor Rex Coupland, I didn’t enjoy the nitty-gritty of research and much preferred teaching, scholarship and administration. Rex was a big man with a long stride, so there was warning of his approach as he stomped along the echoing corridors. When professorial footsteps were heard in the distance, one could either dodge into the Dissection Room, or dash into the khasi, or else nip downstairs, along the corridor on the floor below, and then up again at the other end. Silly or what?