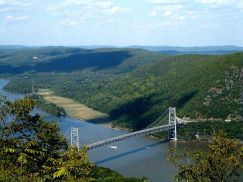 Email diary from Stanley to Susan in Dublin.

Saturday 14 September, a decade ago.

Rose about 8. Can’t see what they see in bagels – tough and dense. Haven’t had decent tea since I left home. Walked to 5th avenue (10 minutes) then the Empire State. Lovely art deco interior. Went up (no problem, unlike Eiffel tower). View not fantastic because of haze. Then down to Skyride – like that thing at Alton Towers where they project on a screen and you get the illusion of being there. Not as good as that thing at Alton Towers.

Walked to Grand Central – famous from films. Wonderful building like a Roman hall. Train journey for 2 hours up the banks of the Hudson River to Poughkeepsie. Passed big bridges, West Point. This is definitely the line in North by Northwest with Cary Grant and Eve Marie Kendall (confirmed, on request, by the conductor). Grand Central was the station Cary Grant caused the commotion at, earlier in the film. Hudson valley lovely.

Got back about 3.30, changed trains in Harlem, walked to St John the Divine Cathedral. Very large, unfinished: dark, gloomy, big disappointment (how typically Anglican). Then late lunch – some sort of ‘wrap’ in a greasy spoon, and subway to Times Square. Got lost. Then wandering hotel-wards (after having unlost myself) and stumbled on this internet café, so here I am at 3 dollars for one hour. The top of the Chrysler building looks lovely – shiny steel art deco – on the front of one of our Gershwin records. Not open to the public. I went into the Woolworth building yesterday – also 1920s features, and was then shooed out – not open to the public – I ignored the notice saying so.

The idea of a play this evening is appealing, but I’d rather not be on my own. Monday will be busy and has to include an evening flight to Pittsburgh, so I will be anxious about getting to the airport in time. American people, as judged by those on trains and the subway are better behaved and more law-abiding – I suppose I mean responsible – than the Irish and Brits. And trains seem not to be used by the wealthy – at least not the trains I’ve been on. 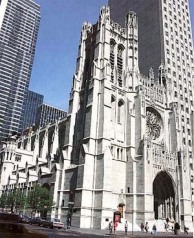 Poked my head in St Patrick’s then came across St Thomas’s (Anglican i.e. Episcopal) which I’d heard of but forgotten about. Music was Bairstow in D so I just had to stay. Church milliner, lovely vestments, stinking rich, sidesmen in morning dress etc. Money money money. Fizzy wine afterwards (they called it champagne – it wasn’t) $2 a glass. Can I have another says I – if you pay another $2, says Mr Snootypants behind the counter. So I waited until he wasn’t looking and helped myself.

People chatting to their friends, visitors largely ignored, so I did my Victoria Wood at a party act (‘did you go for distressed teak for your kitchen furnishings?’) and went over to a couple and talked for a bit, then I went over to a man in his late 50s (approx) with a younger chap, both wearing P G Wodehouse outfits – cravats, hankies in the breast pocket, posh shoes, etc. Said hello, the older man said hello and he said oh you’re English. So was he, plummy – turns out he was Eton and Christchurch Oxford (poor sod). What are you doing here, he said. So I told him and said what line of work are you in. He said, I’m titled so I don’t have to work. Who are you says I. Lord Bingham, the Marquis of Mayenne, says he. Bingham as in Lord Lucan? says I. Yes says he – he is my uncle.

So, you’re a professor says he, yes says I but you needn’t call me that because I don’t like titles and have no intention of calling you Lord. He laughed uproariously (not ‘off with his head’ anyway). This is my assistant, Herman (Mexican). Turns out Bingham is teaching him English and they are restoring a house in New Rochelle, 20 miles away.

Bingham says join us for lunch so I did. In Greenwich Village. Waiter says what would you like for an aperitif. Bingham says, Oh I’ll have the Queen Mother’s tipple, gin and Dubonnet, so we all did. Ah, three queens, says the waiter. I must say, says Bingham, I rather take exception to that remark. Herman 29 is looking for a wife. Bingham says to me how old’s your daughter, so I say 27 and he says is she married, No says I but I think she’s in love. Pity he says. Herman is searching! When Bingham’s not sailing on his yacht (Some Like it Hot) he is an avid doer of good works, visiting the sick etc. He says, we’re going to Roosevelt Island hospital to visit the sick. Would you like to come? So, just going with the flow, I said yes, thanks, lovely.

Over 59th Street Bridge. Depressing, smelly hospital where people are dumped by relatives. Smells of old cabbage/urine. He says prayers with people. It was humbling. Bingham’s certainly devout and very sincere and a good man, but I wondered what the recipients think. Presumably Bingham enjoyed it.

He laid his hands on a black woman who seemed to want it (she grunted and smiled anyway) and then we all had to put a hand on. Do you feel the power of Christ surging through you? This is a bit on the edge for me I can tell you. There was a time when I would have cringed, but now I just take what comes. Needless to say, there was no miraculous recovery. Then we met a Jewish multimillionaire with a stroke and cardiomyopathy, in a wheelchair, who has disowned his family. Entertaining chap – he and I got on well but I can’t figure out why he was in that hospital.

I didn’t get back until 10 pm. This sort of adventure doesn’t usually happen to me. Amazing stuff.