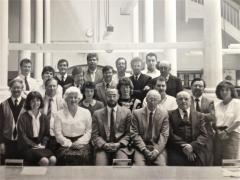 Even then, I had a great future behind me

From time to time I’m invited to speak at medical school reunions of those I taught decades ago. It’s generally the successful ones who attend: in their 40s, on astronomical salaries, often with kids at schools where fees are more than my stipend. One or two have jetted from Hong Kong or Sydney just for the event.

I begin my speech by sympathizing with them. Despite the trappings of success such as big houses, tennis courts, swimming pools, and posh cars, this is a difficult time of life. Children are getting more and more expensive and fractious, relationships are creaking with divorces past or looming, and parents are beginning to lose their marbles. I remember it well, though I never had the telephone number salary.

Standing in front of them is this ‘owd feller’ that they invited to speak because they remember what he used to be like. Even in those days, though, he had a great future behind him, for he peaked when he was 10. They are shocked to see the fat old cynic he’s turned into. They’re astonished at what he’s become. They’re not alone. Some praise his courage for this, slightly envious. Some are mildly amused. Some are dismissively sceptical. But in general they’re lovely, warm, courteous and good fun. Many of them talk privately about an interest in ‘spiritual matters’ that is touching, and displays a vague longing – a certain trace of silent sadness. ‘I can’t swallow all the dogma,’ they say, ‘but I do love churches and church music.’ Me too. I don’t think the man in sandals was known for his love of dogma.

You see, dear reader, many of these worthy people are beginning to be bored. You need to understand that though medical training is lengthy and requires a good memory, it is absolutely not intellectually or conceptually challenging. Consider too that the human body recovers from disease often despite doctors, not because of them: once carpenters and plumbers have done their work, masterly inactivity is often the best ‘treatment’. What doctors need is common sense and humanity, and in my experience those qualities don’t necessarily go hand in hand with academic brilliance. When you’ve removed 321 gall bladders, or done 534 hysterectomies, or seen the effects of deprivation and poverty that you can do nothing about, work begins to pall. And there’s still 15 years to go. Boredom.

How will they cope? Many take to golf. I’m not old enough to play golf. Some will develop a fondness for the bottle or some other peccadillo. Some will spend more and more time on their yachts. When I was an intern in London, every Sunday I had to ring Burnham-on-Sea, where the consultant had his boat, to tell him of his operation list next day and let him know how his private patients were faring without him. Some will become bigwigs in professional bodies, sitting in panelled rooms on committees that reorganize things that don’t need reorganizing. Some try to recapture lost youth propping up the bar at what used to be Lansdowne Road and contrive friendships with players. And so on. A certain trace of silent sadness.

Speaking at a reunion is a bit like going into a fusty room that might have been better left unvisited. It’s hard to resist, though. I return saying ‘I won’t do that again’. But I do. The invitation comes, and I feel vaguely honoured. I’m a fool, of course. I rather suspect that the ex-students think I’ll be as subversive now as I was then. In fact, I’m much, much more.