A twinge of guilt still hangs over one Christmas in the early 1960s. It had been decided that I was going to be a doctor, so one of the presents was a plastic model of a person you could take to bits and put together again, thus learning about the structure of the body. And I never even opened it. I knew it had been expensive, hence the guilt. Before long, in the gloriously impressionable early teenage years, my heart was seduced by music and architecture. Glamour of a sort. The great awakening. The plastic human was shoved to the back of the cupboard.

The hope of Cambridge (never Oxford) enabled me to imagine that I could work in one world but live in another. This is the story of Magnus Pym, A Perfect Spy, but then we’re all spies one way or another. When I was 11, I chose Latin for Cambridge entrance, only to find after a year that Cambridge dropped the Latin requirement. I went through secondary school in a fug really. Music after school was the consolation for what went on in it. I still can’t see why I had to learn about Bessemer converters. I liked O-level biology though. Zoological classification was interesting, seeing patterns in the animal kingdom. A-level was a different kettle of fish, ho ho. The school was one of those chosen to try out the new Nuffield A-level syllabus. Why did we have to see for ourselves? Why did we have to reinvent the wheel? Why did we have demonstrate the bleeding obvious? Why not just tell me? I’ll believe you. Then we can get on with interesting speculative stuff and think about ‘so what?’ Nuffield biology had as high an opinion of me as I did of it, for my A level Biology result was an E – a scraped pass. 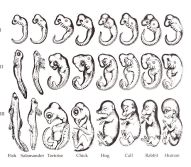 First memories of Cambridge days were not dead bodies in the dissection room, but the lectures from the Professor of Anatomy, Richard Harrison, in which he told us about primates (apes not archbishops), the group to which we humans belong. I was entranced by tarsiers, lemurs and so on, and how we were like them. I enjoyed embryology, hearing that our nine months of intrauterine development could, at a pinch, be seen as something like a kind-of speeded-up evolution—ontogeny recapitulates phylogeny. Fascinating stuff that has stayed with me and continues to intrigue: the evolution of reproduction.

Max, ten years before I knew him

The Senior Tutor of the Cambridge College I was at was himself an anatomist, Dr Max Bull. This was in the late 60s and early 70s. Men only, gates closed at 11 pm, permission needed to be away from College for even one night, dons regarded by statute in loco parentis. Max had a tough time as Senior Tutor in those days with student unrest, revolutionaries, riots and the like. They say if you can remember the 1960s you weren’t there. I wasn’t there. I suppose I became an anatomist because of Max: ‘if that’s what an anatomist is, and if that’s what an anatomist does, then I’ll be an anatomist’. In about 1974 Susan and I went to see him to ask his advice. He counselled against a career in anatomy. ‘You’ll never earn much.’ He was right. ‘You’ll always be looked down on by other medics.’ He was right. ‘It’s publish or perish out there; you’ll never get anywhere if you are like me, only interested in teaching.’ He was almost right: as one of my former colleagues in Dublin said to me, ‘the only reason you came to Dublin was because you’d never have made professor in England.’ Like all good advice, Max’s was not taken. He taught generations of Cambridge students, and was, with Dr Gordon Wright, a truly memorable teacher. Another anatomist memorable for other reasons was Dr Michael Message. His contributions to the anatomy course were lectures on statistics. No, I don’t see the connexion either. Here’s a story about him and me.

Picture the scene. First year anatomy viva voce exams, summer 1970. It’s customary for students to dress up for oral examinations: suit, tie, polished shoes etc. But nobody told me that, so here’s this still rather naïve state school boy from rural Cumberland in polo neck and grubby jumper waiting with the suited sophisticates who knew the form. We hope we will be sent to anyone but Dr Message. ‘Mr Monkhouse to Dr Message’. In I go. He passes me a fetal skull and asks me a few questions about how the skull forms and grows. Then he hands me wet specimen dripping with preservative, a triangular shaped wedge of meat on top of a chestnut, with a number of tubes attached.

‘Tell me, Monkhouse, what do you make of this?’
Silence.
‘Come on, come on, haven’t got all day.’
‘Well, Dr Message I don’t know, but it looks a bit like a heart, though if it is it’s not human.’
Dr Message rolls his eyes heavenwards.
‘Oh, come on, come on. Surely you can do better than that.’
More silence.
‘Well, Monkhouse, if I tell you these tubes here (pointing to two of them) develop from the mesonephric ducts, what can you say then?’
‘Well Dr Message’ says I with a broad smile (Oh God, no, not a smile, anything but a smile), ‘I can tell you it’s not a heart.’ Then I chuckled.

That was the end of that. The thing was a bladder (the triangular wedge) and prostate (the chestnut) and the tubes derived from the mesonephric ducts were the ducts that carry sperm from testes to penis through the prostate. The other two tubes were the ureters carrying urine from kidney to bladder. I was right of course: it wasn’t a heart.

Talk of prostate reminds me that I must take a break.