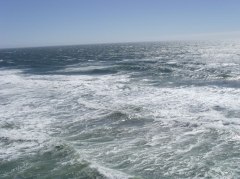 Behold, the sea itself,  and on its limitless, heaving breast, the ships. And in the ocean depths, the ‘things creeping innumerable, both small and great beasts’. Doubtless some of you will be immersing your tired limbs and arthritic joints in the sea at some point, so here’s something to ponder as you lie there sipping your Margaritas or whatever.

It’s a funny thing that we know more about outer space and other planets than we do about the ocean depths on this planet. All sorts of weird and wonderful things live down there. Gigantic single-celled amoebas, bristleworms chomping ferociously through the seabed, as close to the earth’s core as it’s possible to get. Creatures that live with the enormous weight of water pressing down on them, that ‘feel’ their way rather than see (no light down there), that know nothing of greedy bankers or being out of work or feeling depressed. Creatures that adore sulphur and shun oxygen. I suppose all they care about, if they ‘care’ at all, is getting enough food (so do we, if truth be told, though we pretend otherwise).

There are more creatures down there than humans up here, yet we think nothing of chucking our pollutants and radioactive rubbish into their environment. How long before we start to regret our casual disregard for ocean life? How long before the Kraken wakes? How long before our drilling on the seabed causes underwater landslips leading to tsunamis that wipe us out? And some people will doubtless blame ‘God’ for it. 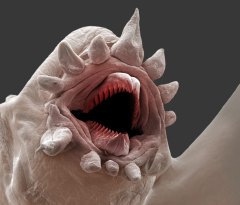 Bristleworm mouth. These things can be a foot long

When we have nuked ourselves out of existence, sea cucumbers and jellyfish and giant tubeworms will still be there, deep down in the oceans. When we’ve been wiped out by our antibiotic over-use, they will still be there. There’s a prayer I always use at funerals that begins ‘O Lord God, who has made us creatures of this earth’ to remind us that we are exactly that—creatures of this earth, like (other) apes, cattle, insects, amoeba, bacteria and viruses. Psalm 24 says the earth is the Lord’s, and all that is in it. Not ours. We are merely custodians.

My mind is like the ocean depths. I sometimes feel like someone who descends in a diving doodah with a powerful light attached. As the light scans over the depths, it illuminates some fantastic demon-creature that, unused to light, quickly flaps away. The trick is to get the light to stay on it, following it, no escape. Sometimes, then, the creature transmogrifies into something rather sad and loveable. Then it disappears as it becomes part of me.

1 thought on “Behold, the sea”