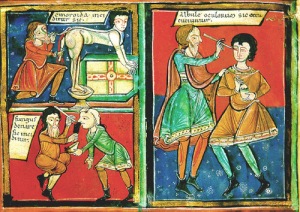 Recently I’ve posted a few blogs about what some people call medical ethics. The ‘discipline’ is a fairly recent invention, its having grown as the influence of faith and religion in society has diminished. I enclose discipline in quotation marks because for the life of me I can’t see that there is any coherent discipline whatsoever. To my mind, given the infinite variety of medical scenarios, it’s impossible to distil a discipline. There are too many variables.

Perhaps I’m wrong, and lack vision. Perhaps, on the other hand, I see that the Emperor is naked, and that there aren’t any generally applicable principles. Perhaps medical ethics is an illusory codpiece trying to constrain what should hang free. Medical ethicists have increased the number of –isms (if you’ve seen Ferris Bueller’s Day Off, you’ll know that he doesn’t care for -isms. I’m with him there), one of which, coherentism, is a fancy word for taking all things into consideration in the present circumstances, and ignoring what we don’t like. It resonates with the observation I’ve quoted before of Fr Herbert McCabe (1926–2001), a Roman Catholic priest and philosopher, that ‘ethics is entirely concerned with doing what you want.’ Hitler had an ethical code: it just wasn’t one that gains much favour today. I wonder how many ‘medical ethicists’ have been at the sharp end—bedside, operating theatre or surgery. How many have been patients with serious illness, or parents of those with serious illness?

Thomas Merton wrote that the gospel message ‘becomes impertinent and laughable if there is an easy answer to everything in a few external gestures and pious intentions. Christianity is a religion for men who are aware that there is a deep wound, a fissure of sin that strikes down to the very heart of man’s being.’ Rowan Williams writes that ethics ‘is a difficult discovering … of what has already shaped the person you are and is moulding you in this or that direction.’ And there, I think, we have it: whatever ‘ethicists’ say, ultimately the resolution of every dilemma comes down to one or more decisions by an individual. An individual makes decisions not on the basis of texts that someone else has written or –isms that someone else has invented, but on what has shaped and is shaping his or her psyche.

For me, compassionate pastoral action matters more than anything else, and this is as true in ministry as in medical practice. Compassionate pastoral action means prudence and 360˚ watchfulness. It means considering the needs of community. It means self-forgetfulness. It means accepting that I will get things wrong, and this is something the public seems unwilling to tolerate. It means humility—knowing my place on the earth, humus.

Confidence and integrity come not from choosing from someone else’s menu of options, but from sifting out what’s appropriate to the truth of my being, and of the situation in which I find myself. If I call myself a Christian, I must attempt to model my life on Christ’s. That doesn’t mean living a life like his, but rather living my life as authentically for me in my circumstances as he lived his for him in his circumstances. If we could encourage medical professionals along this road, I would be cheered. If we could get people of faith to engage more with those at the sharp-end of medical decision-making, and vice versa, I would be thrilled.