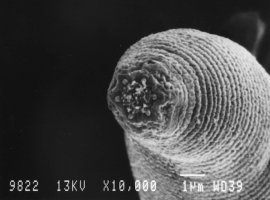 The worm that passes understanding

This week’s New Scientist has three articles that tickle my fancy.

The first is about nematode worms that have been found 3.6 Km down in the earth, where the sun don’t shine. No energy from the sun, no oxygen. And hot. Microbes have been found even deeper. They don’t waste energy reproducing—they simply exist. They move so slowly they seem to be dead. (Do you have friends like that?) But they’re not. It seems they get their energy from uranium and sulphur, methane and hydrogen sulphide. So life on other planets with an atmosphere of such gases may well be a real possibility, just not life as we know it. We use oxygen to get rid of waste electrons, but there are other ways to do that. Maybe as we humans spend more and more time indoors, out of sunlight, and move less and less, we will become like these ‘things creeping innumerable’. We will get fatter and fatter, peering at screens, living in an atmosphere of methane and hydrogen sulphide (farts), and eventually exchange atoms with our environment (like Flann O’Brien’s bicycle seat and the backside on it). We will reproduce by budding. That would save a whole lot of shoving and grunting anyway. And it would mean that the church could stop obsessing about sex.

The second article is entitled The early turd. I suppose you could say it’s also about things where the sun don’t shine. It explains how the study of human excrement from long, long ago (the mind certainly boggles) can tell us about farming in days gone by. Here are some nuggets. Whipworm and roundworm infection exploded about 10,000 BC in Europe as we changed from being hunter-gatherers to farmers. The domestication of wild boar about 8,000 BC made us prone to infection by the liver fluke. In the 13th century AD Christian crusaders from northern Europe, who ate raw fish, took the fish tapeworm to the middle east. And so on. Fascinating stuff. Now wash your hands. 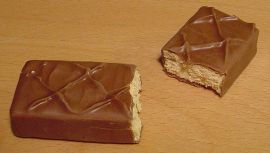 The other article is not about where suns don’t shine, but where they do—in the middle of the Milky Way. It seems that the giant black hole in the centre of our galaxy (and that is only a tiny part of the cosmos) is about to suck in a large gas cloud. What happens then is exciting cosmologists. I’m not entirely clear why we aren’t all being inexorably sucked into a giant black hole. Maybe we are.

Anyhoo, these articles point to a contrast between deep within and far outside, between very small and very big. Unlike the cows (or was it sheep?) in Father Ted, the stuff far away is very big. We humans are privileged to be able to see both ways. We are part of the smallness and the infinity. Is there any theology in this? There most certainly is: we are part of a system. The Greeks had a word for the system underlying all things, and it is logos. The system underlying all things is divine. Or, as John Addison put it, the hand that made us is divine. That takes us to the Incarnation gospel where heaven meets earth.

Let earth and heaven combine,
Angels and men agree,
To praise in songs divine
The incarnate Deity,
Our God contracted to a span,
Incomprehensibly made Man

Charles Wesley had a terrific mind.