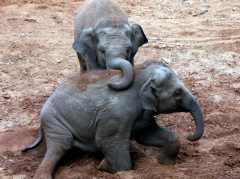 Calves, but not as known in Laois

Some of my parishioners are, as it were, calving at the moment. I’ve just missed the opportunity to be at a bovine obstetric event because I didn’t pick up the phone message soon enough. I asked to be called so that I could have the opportunity to stick my upper limb somewhere the sun don’t shine (normally finger tip and nasal aperture is as far as it gets).

When you see other mammals tumble out into the world, you realize just how immature the human newborn is in comparison. Why? I think it has to do with brain development. If we left if any longer to come out—that is until we were able to stagger like calves, or something similar—the brain would be bigger, the head would be bigger and it would get stuck as it tried to get through mum’s pelvis. So the nine month timing is a kind of compromise between the needs of the mother and the needs of the fetus. That’s my view anyway, and I doubt you’ll find any evidence to the contrary it so it must be right.

What of the placenta? It’s a miraculous organ, another compromise between fetus and mother. It invades the mother so that fetal blood can get near enough to maternal blood for exchange to occur. Too much invasion and mother suffers. Too little, and fetus suffers. Other mammals are very wise to eat the placenta. Why don’t we? (Some do, apparently, but it’s not common.) It’s nutritious, hormone rich, and, unless squeezed, full of blood. Fried I suppose it would be just like black pudding. Add two or three eggs for breakfast. Ahhhhh. I wonder, shall I start a trend here? There’s lots of theology in this.