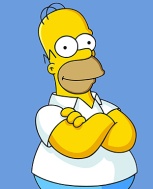 ‘I’m not coming to church: you’re all a bunch of hypocrites.’ I usually respond: ‘well, there’s always room for one more, so you’d be in good company.’ We hear a lot about Judas in Holy Week, and Judas is, amongst other things, a hypocrite. On Monday we heard him say that money used to buy oil should be given to the poor, whereas in fact he wanted to filch it for himself.

There’s an element of ‘it wasn’t me, guv, honest’ in the Judas story. It puts me in mind of Homer Simpson’s advice to Bart. Homer says:

I want to share something with you: the three little sentences that will get you through life. Number 1: Cover for me. Number 2: Oh, good idea, Boss! Number 3: It was like that when I got here.

For all his faults, Homer is a kind of innocent, and he certainly loves his family. But enough of these insights into my depraved televiewing habits. I want to talk tonight about the demons that assailed Judas, and because there’s something of Judas in us all, about our human nature. We left Jesus on Sunday standing at the gates of the city, facing death in the city of wrong. Jesus faces his demons. As we go with him, we must face our demons, our fears. These demons are the enemies within, enemies of spiritual growth, enemies of resurrection. Jesus tells us to love our enemies, but we can’t love these demons until we see them, and we can’t see them until we look them full in the face.

What are our demons? Let’s look at the demons in the Passion narratives. There are three obvious headings:

And of course Judas. I don’t think Judas wasn’t a particularly bad man. He was, like many of us, weak. He sold information. His weakness is part of the story, just as Peter’s denials are part of the story. Maybe if Judas hadn’t killed himself he’s be a saint like Peter. Anyway, let’s look at those three.

We betray others. We betray ourselves. Judas realised that—that’s why he topped himself. Magnus Pym in Le Carré’s A Perfect Spy realized that, and he topped himself too. Greed, avarice, and seeking the approval of people whose approval is not worth having: the three most pernicious demons. Maybe they can be compressed into one: the sin of Adam—trying to be what we are not. The fig leaf has nothing to do with covering up our genitals, but is about covering up our naked selves by putting on a mask, a persona to hide our true faces. We deny the truth because of our need to save face, but it’s not the face that suffers. It is the inner self that I harm when I deny what is evident to others. This inner self that is the Christ within, the Divine within. When we harm others, we wound the Christ within as surely as any nail on the cross.

Here is a poem that tells of this inner kingdom, the holy of holies within that I suggest needs to be allowed to expand  from within so that the brittle shell of self will be shattered. It was written by 20-year old Charles Sorley who died weeks later in 1915 at the Battle of Loos. I marvel at the self knowledge possessed by this young man.

From morn to midnight, all day through,
I laugh and play as others do,
I sin and chatter, just the same
As others with a different name.
And all year long upon the stage,
I dance and tumble and do rage
So vehemently, I scarcely see
The inner and eternal me.
I have a temple I do not
Visit, a heart I have forgot,
A self that I have never met,
A secret shrine—and yet, and yet
This sanctuary of my soul
Unwitting I keep white and whole,
Unlatched and lit, if Thou should’st care
To enter or to tarry there.
With parted lips and outstretched hands
And listening ears Thy servant stands,
Call Thou early, call Thou late,
To Thy great service dedicate.