Dead but won’t lie down

The Dear Leader is dead. Much more interesting than the death was the birth. When Kim Jong-Il was born, North Korean propaganda tells us, a rainbow appeared in the sky and a star appeared over the place where he lay. Remind you of anything?

It’s interesting to look at the ways in which cultures dress up ‘specialness’. For 200 years or so Biblical scholars have debated the significance of virgin births, angels, shepherds, stars and wise men. What does ‘virgin’ mean in that context? People of the Bible knew nothing about egg and sperm at fertilization, so would have a different reaction to the idea of a virgin birth than we do. And so on.

For me, these elements are symbols of the messages of Christmas. Attitudes to a teenage pregnancy reveal the real values of society. The first to hear the good news were young shepherds out in the cold—just as we leave parts of ourselves out in the cold. Wise men follow a star and kneel at childlikeness. They refuse to cooperate with an agent of earthly power who attempts to stifle new growth and creativity. All this is as far removed from the reality of the Kim dynasty as it’s possible to get. 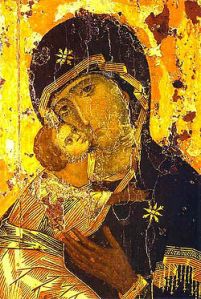 But don’t let’s fall into the trap of thinking that the Divine would approve of this regime, or disapprove of that. The kingdom of the Divine is not of this world, but is an inner kingdom—in here, not out there—and there is no chance that out there will be sorted until we’ve attended to in here.

O holy child of Bethlehem, be born in us today.

Our God contracted to a span, Incomprehensibly made Man. And we the life of God shall know, For God is manifest below.