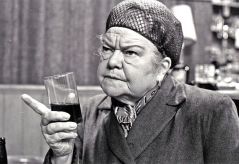 When I want your opinion, I’ll tell you it

It’s a never-ending source of wonderment to me to find that I come across so many people who are experts in everything under the sun. Indeed, sometimes I think that I must be the only person in the world who is not multitalented and omniscient. I fear that the planet will stop rotating on its axis when the curtains finally close around these gifted people. (It’s remarkable how many crematorium committals are accompanied by Frank Sinatra singing ‘and now, the end is here, and so I face the final curtain’ – or ‘Smoke gets in your eyes’). Over the last 40 years I have met such people on councils, committees, groups, and I never fail to be humbled by their expertise and their unselfish willingness to share it with the world. My life has been enriched beyond measure.

When I sang in Carlisle Cathedral choir, before mammals had evolved, I was curiously attracted to Psalm 131, and not merely because it was short. It begins: Lord, I am not high-minded: I have no proud looks. Whether or not I had or have proud looks, it’s the second verse that sticks in my mind: I will not exercise myself in great matters that are too high for me. You may not know this, but an extra verse has recently been discovered in a cave near the Dead Sea, and I’m the only person to have seen the manuscript. The additional text goes: and I wish everyone else would mind his or her own business as well.

There is an irregular verb that goes: I have principles, you are awkward, he/she/it is intransigent. Or you might prefer the more regular: I don’t know everything, you don’t know everything, he/she/it doesn’t know everything. Ludwig Wittgenstein said (something like) ‘whereof one cannot speak, thereof one must be silent’, and ‘nothing is so difficult as not deceiving oneself.’ If we say that we know everything, we deceive ourselves and the truth is not in us. Our own opinions are just that—opinions. Others may disagree with us, others may have had experiences that are different from ours and lead them to different conclusions. I know I harp on about this, but the fact is that one day we’ll be dead, and then our opinions won’t matter two hoots.